Hi all,
On Friday Plumpet hatched some chicks. We couldn't see or hear them but that is when they were due.
But on Saturday we had a visit from L and M who were the donators of the 6 eggs we put under Plumpet.
So we went up to have a look and see if we could see any baby chicks.
We heard them cheeping as we approached.
Plumpet was off the nest and in the pen attached and sitting tightly on her chicks so we couldn't see how many she had.
We inspected the nest box to find 1 egg and one chick on its back cheeping loudly. Still a bit wet from emerging from its egg but abandoned by Plumpet. I picked it up and it was cold so I quickly came round and put it under mum.
We watched for a bit and saw a head or 2 pop out from between the feathers but no more.
We could see that the cold chick had not moved so we decided to bring it indoors and warm it up by the lamp and a wheat bag heated in the microwave.
It was still cheeping loudly and some hours later its feathers had dried out but it was having trouble standing and walking.
We kept it inside till just on dark when we went and popped it back under Plumpet.
So this morning we went down to see how things were.
She was sitting in her pen and there were no chicks in the nest where we left them last night so they must all be under her. Sure enough she had the 5 chicks under her. 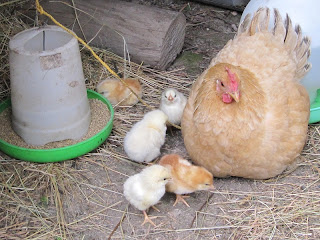 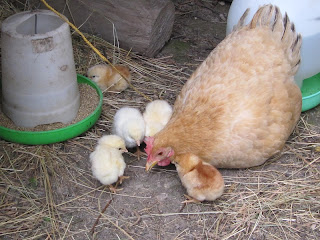 The one to the left, the little ginger one was not real good yet.
She didn't seem to hear her mum calling. While the others were listening to mum and learning about what to eat and how to drink this little one was looking off into space. I think she was looking for Martin, I think she imprinted on him and wasn't hearing her mum.
It just wanted to get under her to keep warm, it worked that out. But it wouldn't eat and when she got up and moved around it got left behind. It wasn't walking properly and kept falling over after 3 steps or so.
Seems to have weak legs or something. Maybe she had abandoned it for a reason. 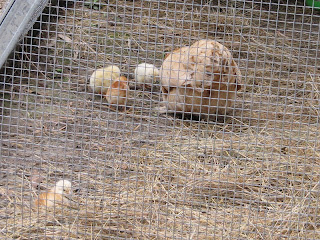 You can see it in this one, it is lost and peeping loudly but she doesn't hear it.
Anyway it managed to keep up with her and Monday morning it is almost one of the flock. It appears to be hearing her and learning what to eat and drink.
It still stairs off into space a bit and wobbles on its legs but is part of the group. So we thing she'll be ok.
So if they come true to Isa brown colourings we have 3 males and 2 females.
That's 3 dinners and 2 egg layers.
Not bad for a first go!
Dayla